You or someone you know has probably had some kind of cyst. In many cases, a person will have a cyst, not realize what it is, and then ignore it because it’s not bothering them at the moment.

But this can turn a minor issue into a larger, chronic problem.

The Most Common Type of Cyst

Different types of cysts occur in different parts of the body for different reasons, so it’s important to have a general understanding of cysts and, if you notice one developing, have it checked by a specialist.

The most common type of cyst is a sebaceous cyst. Think of a cyst as a balloon with the opening at the top on the outside of the skin. The skin on the inside that lines the balloon is producing skin cells.

Instead of those skin cells falling off into the atmosphere, the cells become trapped in the balloon. The balloon grows as it becomes filled with skin cells. The balloon may even rupture, which causes the cyst to become painful.

Essentially, a cyst is a ball of skin cells that are trapped underneath the skin.

Why Does A Cyst Require Treatment?

Ideally, a cyst should be removed before it ruptures. When a cyst ruptures, the skin cells in the balloon disperse and break up in the area under the skin.

This causes a lot of pain and inflammation that tends to last a long time because the body has to break down and carry away skin cells that don’t belong under the skin.

Because the cyst has been emptied, it’s capable of recovering and starting again. The cyst can repeatedly rupture and fill up. This cycle is not only painful, but it also creates scarring in the area.

Chronically ruptured cysts are complicated and difficult to treat because the area turns into a mix of scar tissue and a number of small cysts that have broken off and formed. At that point, it’s usually best to surgically remove the entire area of skin.

On the other hand, if the cyst isn’t ruptured, it’s relatively easy to remove the entire cyst, which allows the wound care to heal quickly so you can avoid the problems of chronically ruptured cysts. 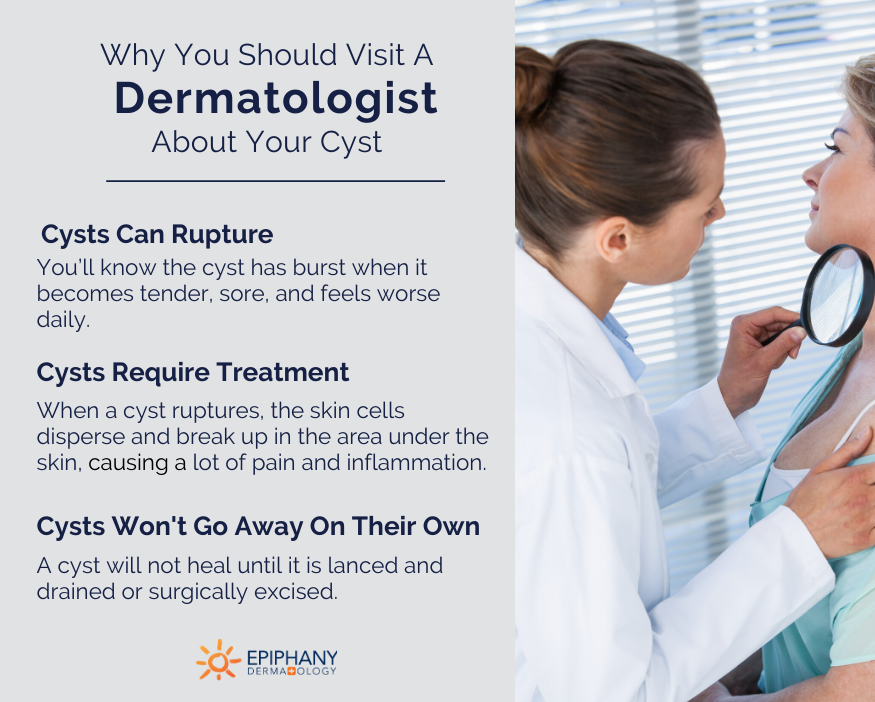 Why Should You Visit a Dermatologist Before Your Cyst Ruptures?

It’s important to treat cysts as soon as you can reasonably visit the dermatologist. When cysts are small, they’re easier to treat and remove. When they grow, it requires a larger surgery to remove it, but there’s a greater risk that the sebaceous cyst will rupture before you have it removed.

Think of cysts like a balloon of skin cells. It has a little opening at the top that leads to the outside. Underneath the skin, the balloon is filled with dead skin cells… and continues to fill with these cells.

There’s no predicting exactly when the balloon will burst. Some sebaceous cysts rupture while they are small. Others become very large, but eventually all cysts rupture. It may burst because there is simply no more room for the pocket to grow. Or, it may be bumped or broken and consequently ruptures.

Once a sebaceous cyst ruptures under the skin, it will become hot, drain smelly material, and then it needs to be lanced. At this point, there’s a greater chance it will return because the lining is more difficult to remove completely.

What Happens If A Cyst Bursts Under the Skin?

Most people know when they have a bump under the skin. They’ve had it a while and it doesn’t bother them. It then begins to grow and may begin to leak small amounts of smelly puss. You’ll know the cyst has burst when it becomes tender, sore, and feels worse daily.

What happens if a cyst bursts under the skin is the body recognizes the cells that leaked out don’t belong there. As the body works to fight the cells and push them out, the skin over the cyst becomes thin, red, and inflamed. The contents start to ooze out of the pores in an attempt for the body to push out the ball of skin cells.

This makes the skin extremely painful to the touch — even when clothes brush against it.  The painful sebaceous cyst oozes and weeps constantly. Unfortunately, many people wait until this point before they see their doctor, but the cyst could have been more easily treated before it ruptured.

How To Tell If A Cyst Is Infected

When a sebaceous cyst ruptures under the skin, it’s not usually infected. In most cases, it needs to be drained by a doctor who can lance the cyst. Some physicians prescribe antibiotics to settle the red, painful area of inflammation. However, these medications are not effective. The body is reacting to dead skin cells trapped under the skin, not bacteria. Once a sebaceous cyst ruptures, it needs to be lanced, not treated with medication.

Will A Cyst Go Away On Its Own?

A cyst will not heal until it is lanced and drained or surgically excised. Without treatment, cysts will eventually rupture and partially drain. It may take months (or years) for these to progress. Once they rupture, the painful sebaceous cyst will likely return if the pocket lining is not removed entirely. To prevent recurrence and ongoing problems, it is best to have sebaceous cysts treated to remove the problem.

When Is It Time to See A Dermatologist?

A cyst feels like a little knot or kernel underneath the skin. It may begin as an ingrown hair or acne pore that becomes infected, creating an opportunity for the skin to get turned in on itself. The cyst may also drain a bit. A Pilar cyst grows on the scalp and tends to be hereditary, while epidermoid cysts occur on other parts of the body and will not go away on their own.

If a cyst becomes infected, it can limit the treatment options to draining and antibiotics. The sooner you see a dermatologist after noticing a cyst, the smaller the chance of pain developing or the cyst coming back. If you’re not sure if you have a cyst, see a dermatologist and let an expert make the diagnosis.