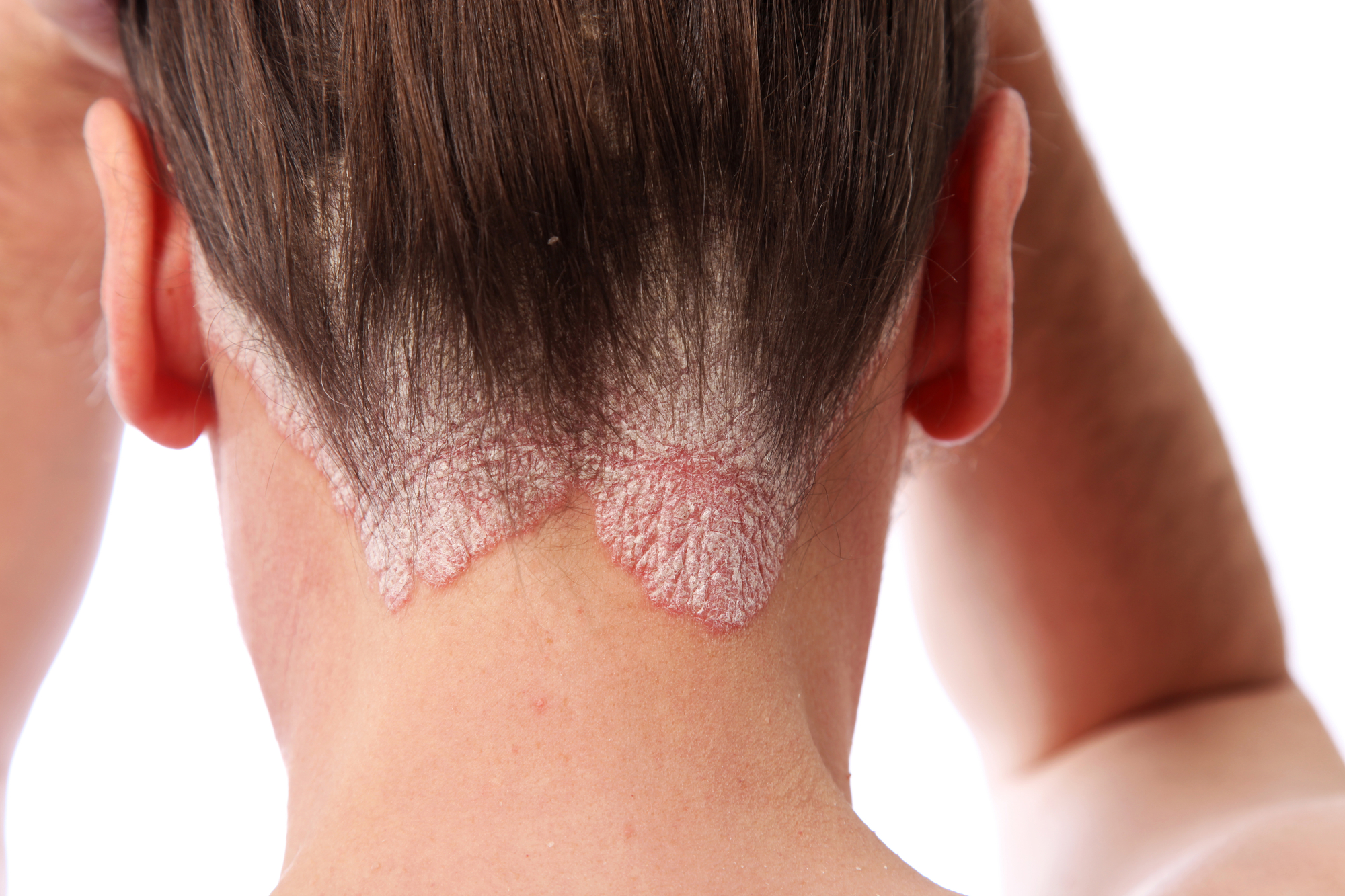 Psoriasis is an inflammation in the skin that is driven by the body’s own immune system. The inflammation in the skin causes the skin and creates red, itchy, and scaly lesions mainly around the elbows, knees and scalp. The chronic condition can appear as early as childhood. While it’s not contagious, psoriasis is a condition that is important to seek the help of a dermatologist.

What Are the Symptoms of Psoriasis?

Psoriasis typically affects larger parts of the skin. It tends to present with redness, scaling, and thick, itchy raised areas of skin known as plaques. It most commonly appears on the elbows and knees, but it can show up any place on the body including the trunk (particularly around the belly button), scalp, genitals, and underarms. Occasionally, it affects the face, hands, feet, or even just the nails.

It has a variety of skin presentations and types which include:

Inverse psoriasis appears in the armpits, groin, genital area, behind the knees, or underneath the breasts. Affected areas are moist, shiny, smooth and often an irritated red color. Hard to diagnose, inverse psoriasis can look like allergic reaction or a fungal infection.

The most common type of psoriasis causes red, raised patches of skin, often covered with a white, plaque-like scale. These patches appear primarily on the knees, elbows, and scalp.

Symptoms of pustular psoriasis are small pustules — blisters containing pus — in specific areas of the body or widespread throughout. This is a severe type of psoriasis and often appears quickly and in cycles.

The most severe and rarest form of psoriasis, erythrodermic creates fiery red skin that sheds in large pieces. This type of psoriasis destabilizes body temperature and can be life-threatening. If you believe you have erythrodermic psoriasis, seek medical attention immediately.

Caused by an overreaction of the immune system, psoriasis is a disease in which the body has been tricked into thinking an infection exists in the skin. A combination of genetic and environmental factors, the specific triggers of psoriasis vary for every individual.

When the immune system tries to treat the infection with the acceleration of skin cells, itchy plaques or other marks appear on the skin. While it may not be an aesthetically pleasing experience, psoriasis isn’t contagious and can be managed.

There are genetic links to psoriasis, and while it’s not 100% hereditary, it does tend to run in families. Typically, it’s a combination of these factors that causes psoriasis to appear. If you get it, you’re likely genetically predisposed to psoriasis and experiencing a stressor (emotional, physical, mental, or food-related) that triggered a reaction.

What Are the Treatment Options for Psoriasis?

Often topical steroids can be used with other topical or systemic therapies to boost their effect. We cannot use oral or topical steroids without breaks — they end up causing problems and do not work as well over time. However, by strategically adding medications between steroid pulses, we are able to continue treating the problem without over-medicating.

Dermatologists have a large number of options to consider when selecting a systemic treatment. Oral medications tend to target the inflammation caused by the immune system.

Acitretin is one of the most commonly used oral, systemic therapies. This tried and true medication is similar to Accutane but milder and more sustainable over longer periods of time. With regular use, it causes the skin to grow smoother. Acitretin has a low side-effect profile and doesn’t decrease the immune system.

Methotrexate is a low-dose oral chemotherapy option proven relatively safe and predictable. While this mild systemic therapy is still considered effective, it has been mostly supplanted by newer biologic therapies.

Injectable or biologic drugs target the pathways the body’s immune system uses that lead to inflammation. Biologic drugs selectively suppress the immune system in a very specific way to block the inflammation that leads to psoriasis. Most patients do not experience increased colds, but these medications do increase the risk of upper respiratory problems and other health problems. Patients need to follow up with their dermatologist every six months for regular health checks. When the side effects are managed, these medications are very helpful for managing psoriasis and completely clear plaques for many patients.

Phototherapy treatment isn’t exclusively for psoriasis, but for some patients it’s especially effective. UVB phototherapy uses a machine with a specific light bulb to create a wavelength of light that reduces inflammation and improves the skin condition as it refracts off the skin.

These units can be used in clinics or prescribed for home use. For patients who want to avoid internal medication, phototherapy has the distinct advantage of being drug free.

No. you cannot contract or spread it through physical contact.

My psoriasis improves after I’ve been in the sun. Can I use a tanning bed for treatment?

Before we understood the causes of skin cancer, doctors exposed patients to UV light to treat their psoriasis. Symptoms improved as the light calmed the immune system. However, we have more effective treatments and can avoid exposing patients to harmful UV rays.

Is there a difference between eczema and psoriasis?

Even though both conditions appear as red, scaly patches, eczema and psoriasis are not the same. Eczema can be found in the folds of the skin, like behind the knees and elbows, while psoriasis appears on the outside of those same areas.

Eczema patches have exaggerated skin lines, and the scales are thin with possible blisters. Cracking and weeping of the skin are more common in these areas.

Psoriasis, on the other hand, appears as well-defined plaques. The scales are thicker, stacked on top of each other, and turn extremely red. Occasionally, they’ll crack and bleed.

Can psoriasis be cured?

Research is constantly advancing around treatment for psoriasis, but currently, there is no known cure. However, with the assistance of your dermatologist, steroidal, non-steroidal and oral medication, psoriasis can be managed.

Do I Have Psoriasis or Seborrheic Dermatitis?

It’s easy to confuse these two scalp conditions. Sometimes they overlap, and they’re often treated similarly. But the causes and severity of the conditions differ.

Seborrheic dermatitis flares up because of a yeast that lives on the oils in the skin. The yeast causes mild irritation, redness, flaking, and itching. Usually, it occurs at the back of the scalp. (If it’s all over the scalp, it’s dandruff.) Other times, seborrheic dermatitis shows up as red, scaly areas in the eyebrows, around the nose, in the ear, or behind the ears.

Seborrheic dermatitis responds well to treatment and heals temporarily. But the yeast never goes away completely, and the oil your skin produces is unchangeable. So when it eventually comes back, you have to treat it again.

Since no one treatment is effective for everyone, find a dermatologist that will work to find the best solution to your psoriasis symptoms. Whether it’s a pill or topical medication, there’s a treatment that will work for you.