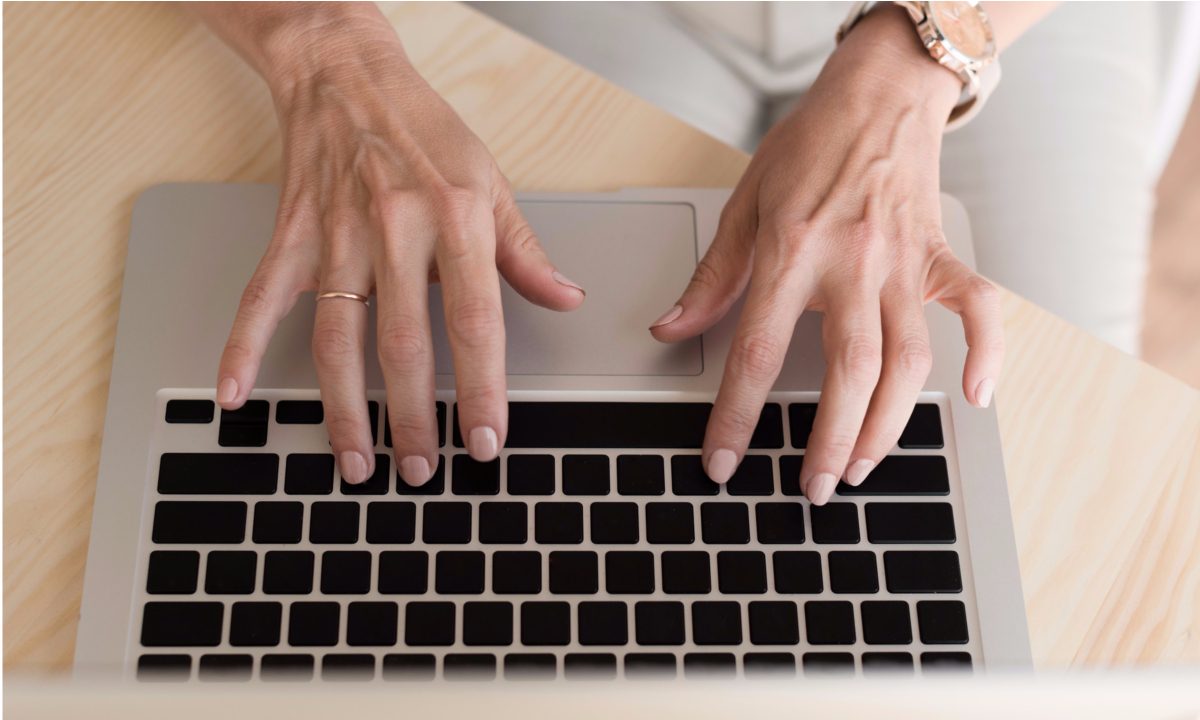 You look down one day and notice some unexplained bruising on your arms. You vaguely remember bumping your arm, but it looks as if you had a major injury. What’s going on? It could be actinic purpura.

Known as actinic, senile, or solar purpura, this condition leaves flat, dark splotches or bruises on the skin. It looks like a bruise, but it takes weeks to go away.

How Do Bruises Develop?

Bruises develop for a reason — even if it’s a subtle one. An injury occurred that made the skin fragile, even if the impact went unnoticed. If you develop unexplained bruising on your arms or legs, something caused it — you touched or bumped against something that resulted in that bruise.

So, What Exactly Are Bruises?

Bruises show when a blood vessel breaks and leaks the blood it contains. Often, we don’t even notice when we bump against something. That injury causes a blood vessel to break, but the vessel clots almost immediately. We don’t see a bruise or experience a problem.

When we see a bruise, we typically broke a larger blood vessel that takes more time to clot. The blood runs out of the vessel into the tissue underneath the skin and pools between the skin tissue. Typically, there’s pressure and resistance within the skin that keeps the blood trapped in a smaller area. That pressure then works to help the blood coagulate, stop the bleeding, and patch the hole in the blood vessel. That pool of blood is what shows as a bruise.

The red blood cells and platelets that make up the bruise eventually get absorbed by the body. The body breaks them down and carries them away. When we’re left with a brown spot after the bruise has started to disappear, we’re seeing the iron that remains from the pooled blood. While the rest of the cell is absorbed, the iron remains and appears as a lingering brown spot.

Where Are the Most Common Places for Bruising?

Plus, these are the areas that have suffered from years of sun damage. What ares on our bodies are exposed most often? The arms, hands, and face. Those areas where we get the most sun is where our skin thins the most.

So, why are you suddenly dealing with big bruises from minor bumps? Actinic purpura starts because of thin skin. A combination of sun damage and aging causes our skin to thin over time. To make it worse, our blood vessels become fragile, too. This means even a small bump causes the skin to bleed from underneath, leaving you with with a long-term bruise. 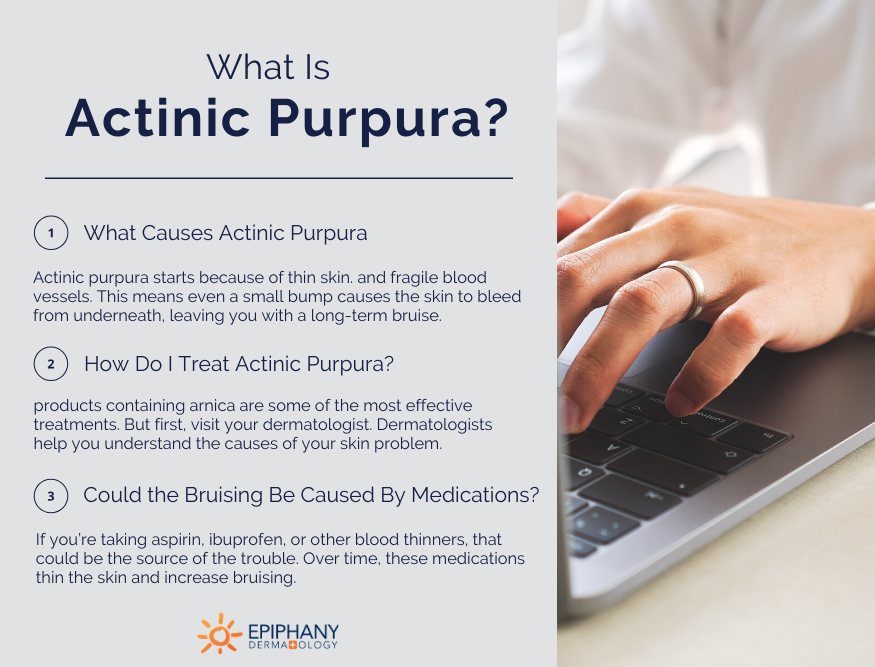 Could the Bruising Be Caused By Medications?

Senile purpura technically comes from sun damage, but similar bruises can show up with regular use of certain medications. If you’re taking aspirin, ibuprofen, or other blood thinners, that could be the source of the trouble. Over time, these medications thin the skin too. Plus, they increase bruising.

Aspirin permanently inhibits platelets that help our blood clot. Once those platelets are exposed to the medication, they can no longer bond. But since you’re always making new platelets, you don’t see the effects immediately. Yet, if you continually take these medications, you’ll likely start seeing more frequent bruising.

Actinic purpura and solar purpura are the same diagnoses. “Actinic” and “solar” both mean sun. “Purpura“ refers to blood that’s lost from the blood vessels and trapped in the skin resulting in a purple spot.  While we often refer to this as a condition caused by aging, it’s more accurately a condition caused by years of sun damage. Because of sun exposure, the skin has become so thin and fragile that it bruises with very little injury.

When To Be Concerned About Bruising

While bruises are often just a side product of the body’s natural healing process, they’re not always harmless. We become concerned when young people bruise easily and often. If a young adult or child is experiencing unknown bruising, it’s important to talk to your family doctor or pediatrician to identify the cause and begin appropriate treatment.

What Types of Doctors Treat Bruising and Actinic Purpura?

If you’re concerned about bruising easily, start with a visit to your family doctor. If you’re on blood thinners and you’re bruising too much, the doctor who prescribed the blood thinner may need to adjust your dosage.

It’s also appropriate to talk to your dermatologist about bruising concerns. If you suspect your bruising is coming from actinic purpura, you’ll be able to explore your options for treatment. Treatments including over-the-counter products like DerMend can help improve the appearance of bruises and restore some of the protection you’ve lost with age. If frequent bruising is a result of another condition, they’ll be able to point you in the right direction for an accurate diagnosis.

How Do I Treat Actinic Purpura?

These splotches can be frustrating and unsightly, but they aren’t dangerous. However, they tend to accumulate. So you may start with an occasional spot, but over time you’ll have an armful.

If you’re looking to get less bruising, products containing arnica are some of the most effective treatments. These products are available at most health food stores or pharmacies and offer a homeopathic option for dealing with blood clots.

But first, visit your dermatologist. Dermatologists help you understand the causes of your skin problem. Patients often don’t know why they’re having a particular problem. We can help you figure out if it’s a result of sun damage, or if you’re getting too much of your blood thinner medication.

If it’s bruising from all that sun damage, then there may be other problems from sun damage too. This initial bruising could be a sign of other sun damage issues to come. The sooner we start treatment and prevention, the better your skin will be.