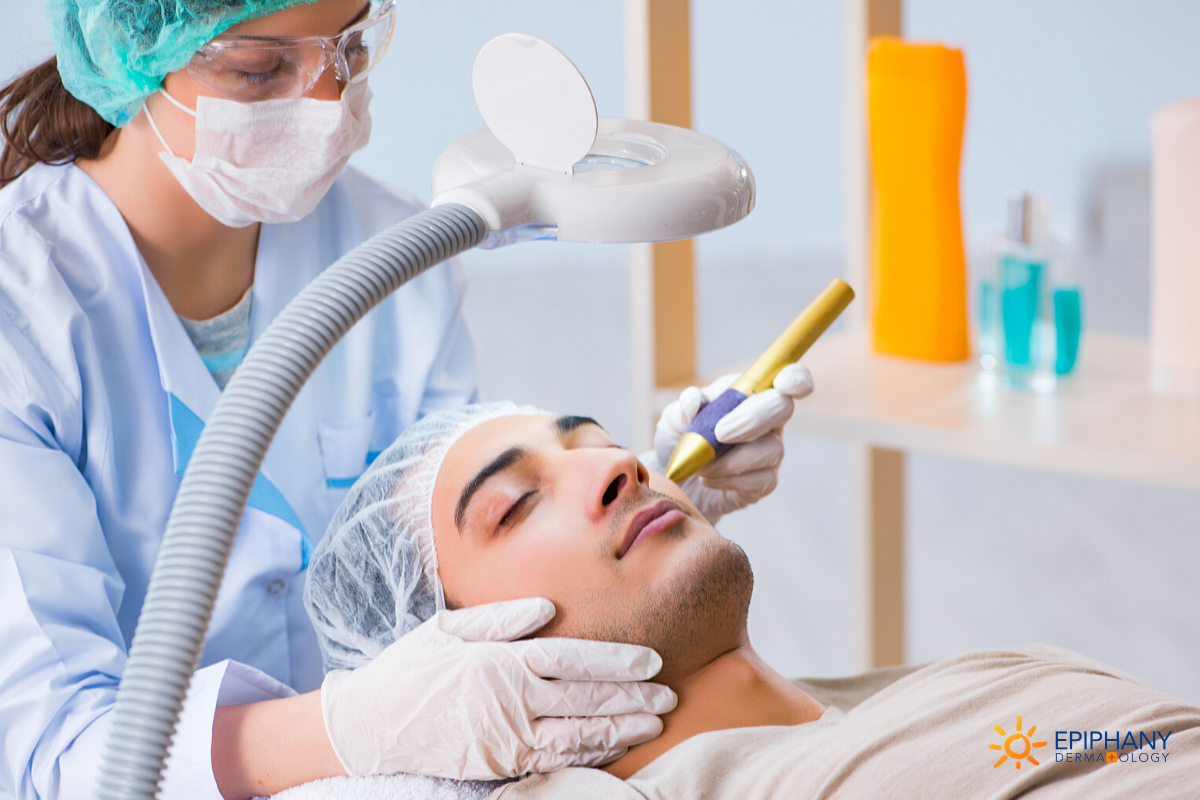 Lasers seem to do it all. If you’re considering a laser treatment, the possibilities seem endless. They’re used to treat skin texture, aging, and discoloration to name a few. Plus, they help solve the “how to remove hair permanently” dilemma.

Lasers are so effective in dermatology, it can seem overwhelming for patients to decide where to start. Not to worry — your dermatologist will help you decide the best option! But, before your appointment, here are the basics.

Types of Skin Lasers (and What They Fix!)

Here’s the difference between them and what to expect during treatment:

Fractional lasers work by emitting energy in a fractional (not solid) manner. This laser is used to remove areas of skin, but because it’s fractional, it doesn’t remove all skin in the targeted area.

Both ablative and non-ablative lasers emit fractional light, but they work a little differently. Here’s how:

The ablative fractional laser removes the top layer of skin, but it doesn’t remove the entire surface area under the treatment lens. It leaves areas of skin in tact. After a full-face ablative fractional laser treatment, skin heals completely within 4-5 days and redness fades within a month. As the skin heals and regrows, patients notice immediate results. Skin tone looks even, the brown spots are gone, and many wrinkles have disappeared.

Although healing is quick, there’s some downtime. We recommend patients schedule ablative laser treatments when they can take a full week to care for the skin.

After ablative laser treatments, there’s a small risk of infection. As a precaution, we prescribe antivirals for all ablative laser patients. This guards against all infections, including the cold-sore virus (herpes-simplex virus 1). About 90% of adults test positive for the antibodies against the virus that causes herpes-simplex. Anytime there’s a trauma to the skin, there’s a risk of reactivating the virus. If the patient has open-skin everywhere, that infection could be serious. The antivirals make infection unlikely, but we always give patients a phone number where they can reach us after hours should that occur.

We ask patients to schedule an appointment one week after treatment to evaluate how the skin is healing. We also want to check-in with the patient to see if they’re taking proper care of their skin with moisturizer and sunscreen. After 4-6 weeks, the patient comes in for final evaluation and photographs.

For patients who don’t want downtime, or can’t take it, we offer the non-ablative fractional laser. This fires little pulses of energy through the skin.

The non-ablative laser emits tiny pinpoint beams that penetrate the epidermis without removing the skin. The energy emitted enters the skin even deeper than the non-fractional laser, reaching the deeper layers of the dermis. At this depth, it triggers remodeling of collagen.

Because it’s not taking off the top layer, healing is quick. After a treatment, the skin looks red (like a mild sunburn), but it usually fades by the next morning.

Results with this laser aren’t quite as drastic as the ablative laser. It typically takes four treatments over 4-6 months for patients to notice significant results. While the non-ablative laser doesn’t offer instant gratification, it’s particularly effective in diminishing scars and wrinkles. 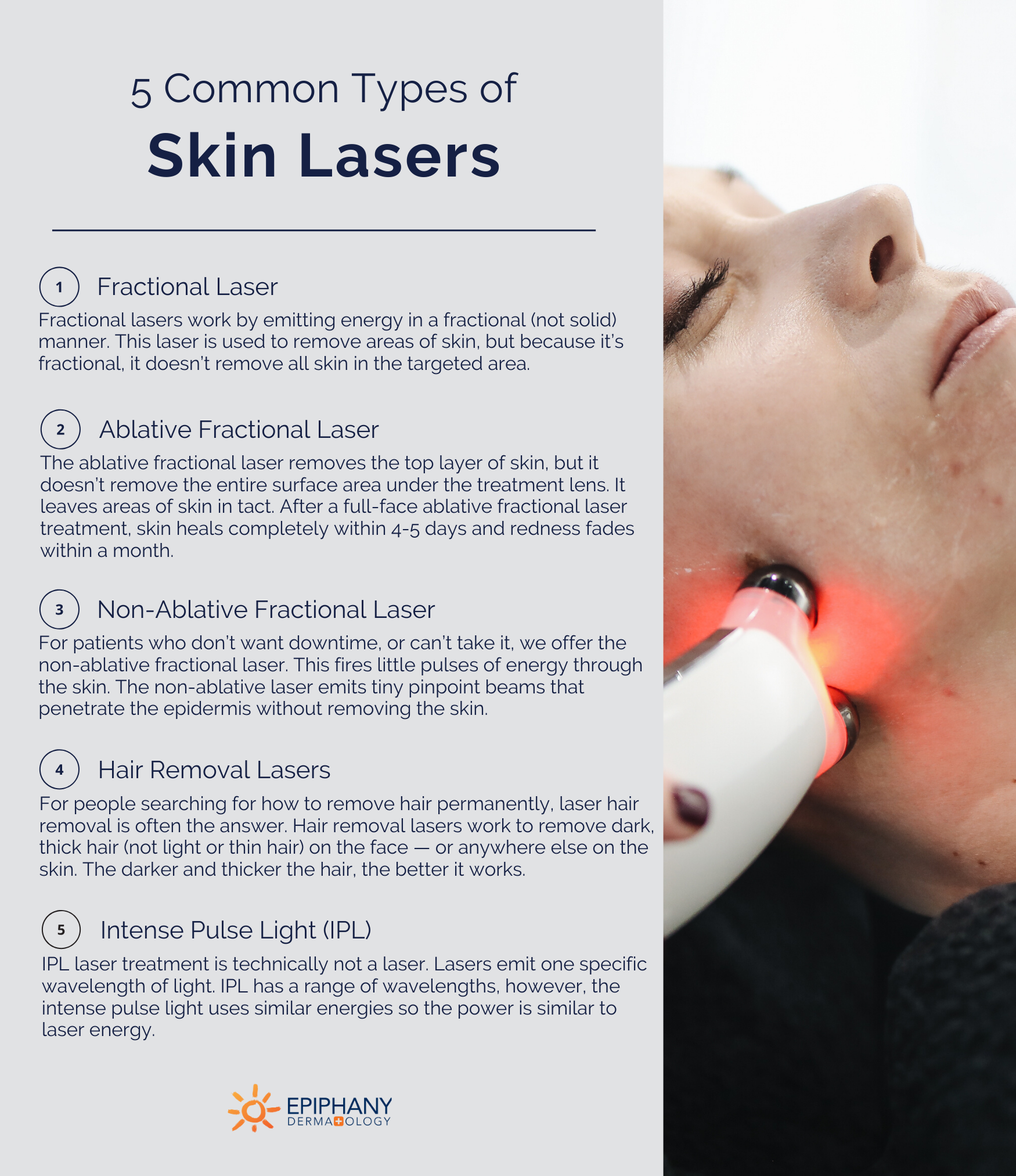 For people searching for how to remove hair permanently, laser hair removal is often the answer. Hair removal lasers work to remove dark, thick hair (not light or thin hair) on the face — or anywhere else on the skin. The darker and thicker the hair, the better it works.

Hair growth progresses in three phases. The laser treats hair in the growing phase, but the resting phases will not be treated with the laser. You have to wait until hair goes through its growing cycle before it can be treated. One treatment will not wipe it out. Expect to need a minimum of 4-6 treatments.

IPL laser treatment is technically not a laser. Lasers emit one specific wavelength of light. IPL has a range of wavelengths, however, the intense pulse light uses similar energies so the power is similar to laser energy.

IPL’s primary advantage is the range of light it emits, allowing us to target multiple issues with one treatment. When we use true “lasers” to treat pigment issues or redness, we have to use one specific wavelength for what we’re treating. Since the color of the light is selectively absorbed by what we want to remove (called selective photothermolysis), we can only treat one issue at a time.

For example, if you want to remove blood vessels, they have to be matched with a green wavelength to remove red. But if we want to treat brown spots, we have to switch to a different wavelength and do a secondary procedure. With IPL, the broader wavelength allows us to treat both redness and pigment at the same time.

We usually recommend a minimum of three IPL laser treatments over a period of two weeks. Although the first treatment is typically the most visibly effective, it takes at least three treatments to see desired results. IPL is most effective with redness and brown spots on the face, neck, chest, or arms. Plus, there’s no downtime and minimal redness following an IPL treatment.

What To Expect After Laser Treatments

After each treatment, we send patients home with a care kit specific to their treatment. It contains moisturizers, gauze, healing solution, and instructions. Moisturization and sun protection are vitally important as the skin heals.

After an ablative laser treatment, avoid the sun entirely. Sunscreens are not recommended right away. Once the skin heals and you return to the sun, apply chemical-free sunscreen (zinc or titanium based) since there’s a higher probability of developing irritation or contact allergy on this fresh, new skin.

Whether you’ve been wondering how to remove hairs permanently, contemplating ways to erase those sunspots, or are ready to start treating your lines and wrinkles, consider laser therapy. With modern advances in the use of lasers, we have ways to treat a multitude of skin issues with treatments that vary based on your preferences, needs, and availability for downtime. Give us a call today to start discussing the right option for you.

Dr. Angelo Petropolis is a board-certified dermatologist in Sierra Vista, AZ with over 25 years of experience. He is skilled in practicing medical, surgical, pediatric, and cosmetic dermatology, and he has extensive expertise in the treatment of skin cancer, Mohs micrographic surgery, and the treatment of aging skin. In his spare time, Dr. Petropolis enjoys traveling with his wife of 42 years, Wanda, spoiling his grandchildren, and flying.