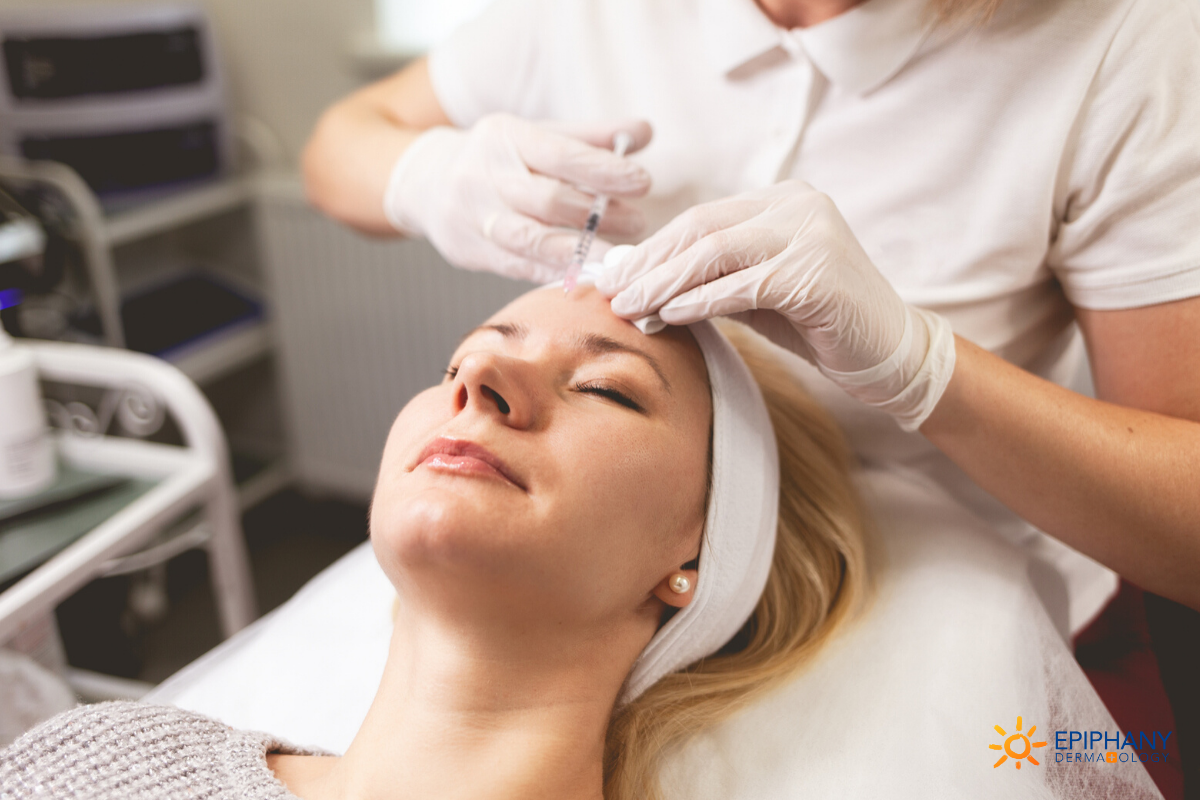 Some people swear by it. They talk about it as casually as getting their nails done.

Others see it with skepticism. “Who would choose to have a chemical injected in their face?” they wonder as they imagine frozen-faced women who never frown.

While it’s controversial for some, Botox is still one of the most popular cosmetic procedures in the United States. However, that doesn’t mean you should approach your first procedure with complete nonchalance. You need to know what you’re getting, how it works, how long it lasts, and what not to do after Botox.

What “Botox” Actually Is

Botox is one of the brands of botulinum toxin. Other common US brands include Dysport and Xeomin.

A botulinum toxin is derived from a bacteria called Clostridium. This toxin is a competitive binder to a receptor in the muscle that the nerve uses to activate the muscles. By binding to the receptor, it prevents the nerve from telling the muscle to contract.

Botox does not work like a filler, which means you won’t see immediate results. Instead, it targets the muscle causing the specific wrinkle and inhibits it from moving.

Where is Botox Used?

Most people first think of Botox as an anti-wrinkle injection. While facial lines are still the most popular symptom it treats, it also treats sweating, migraines, and some nerve-related issues.

Botulinum toxin is most commonly used to eliminate facial lines. This injection was first approved for use between the eyebrows (the glabella). It’s common to have two deep creases on either side of the nose caused by frowning. We typically refer to these as the glabellar elevens because it looks like two straight lines.

To treat these, we target the corrugator muscles on each side of the glabella. When injected with the botulinum, they don’t contract anymore and the lines disappear.

We also frequently use these injections to treat lines on the forehead area, crow’s feet, and lines around the lips and chin. 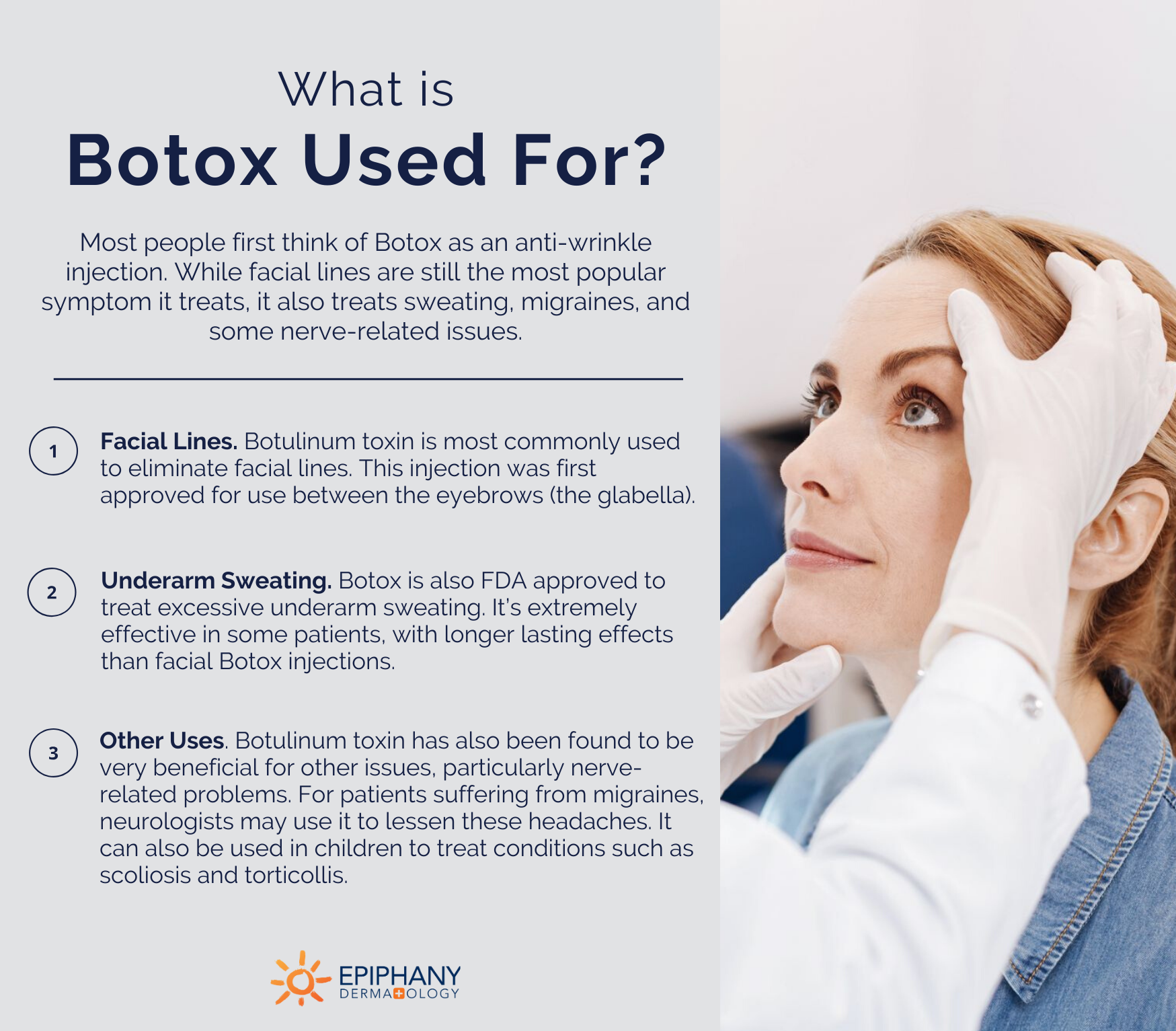 Similar to how the botulinum toxin blocks the ability for muscles to contract, it blocks the ability of the sweat glands to produce sweat. When we inject 100 units (50 per side), it’s like turning the faucet off for patients with excessive sweating for up to six months.

Botox is the most effective way we’ve found to treat hyperhidrosis (even on the hands), but does require ongoing treatments to stay effective. With the small needles we use, it’s very well tolerated with a low-risk of side effects. Contrary to some claims, the low unit dosage doesn’t lead to long-term muscle weakness.

Botulinum toxin has also been found to be very beneficial for other issues, particularly nerve-related problems. For patients suffering from migraines, neurologists may use it to lessen these headaches. It can also be used in children to treat conditions such as scoliosis and torticollis.

What To Expect During a Botox Treatment

Any type of botulinum toxin injection is a short procedure. Treatments on the face typically last 15-20 minutes and require no anesthesia. The needle is very small and generally well-tolerated. Some physicians opt to apply a vibration device to the vicinity of the injection making the procedure even more tolerable.

When treating the underarms, we usually start with an iodine starch test. We first paint the armpits with iodine and dust it with cornstarch. As the patient perspires, the powder changes to a purple color and helps us pinpoint the exact location of the sweat glands. At that point, we begin injections, which takes about 30 minutes to complete. 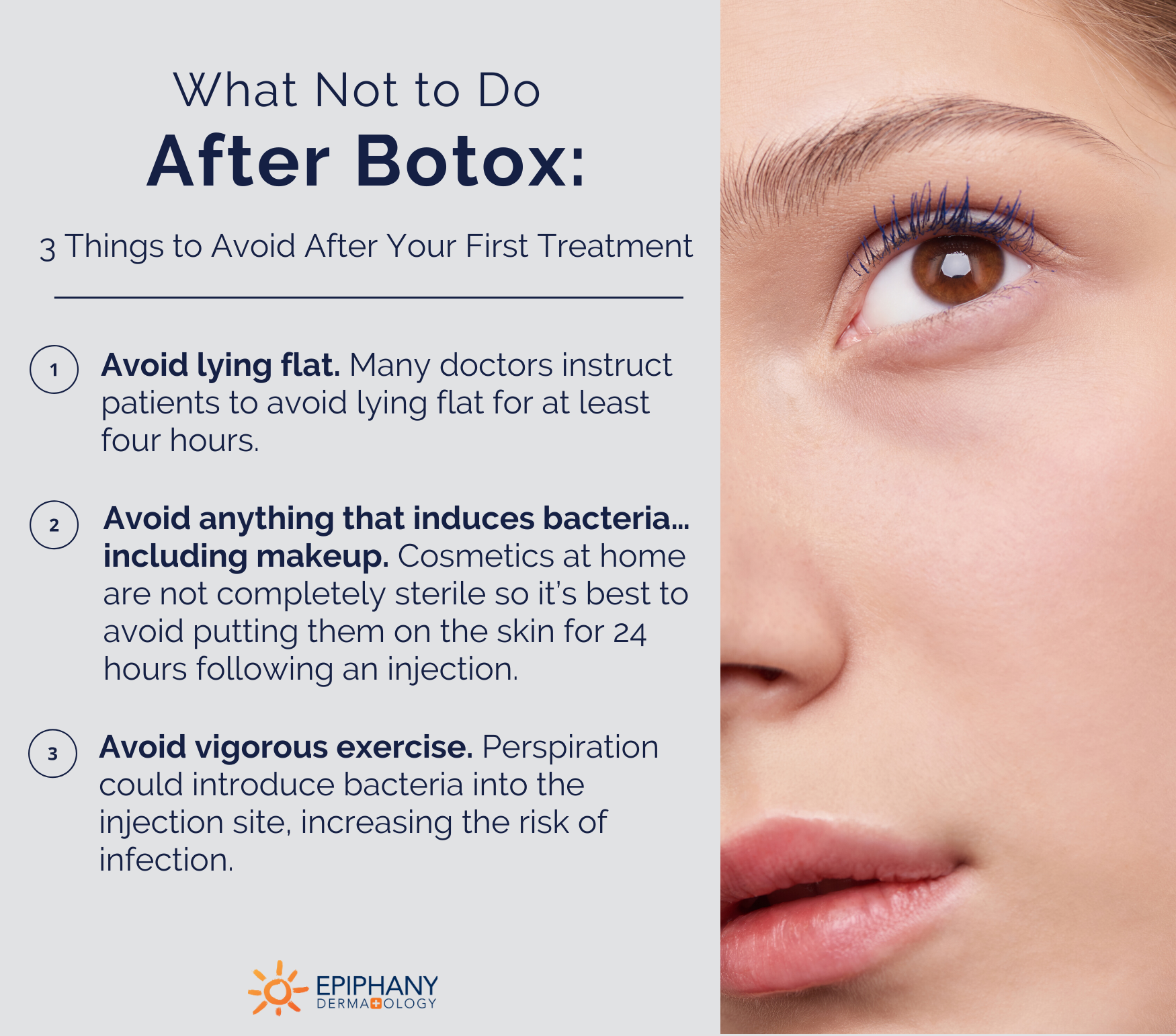 What to Do (and What Not to Do) After Botox

There’s no downtime with Botox treatments. You can expect to get back to your day with minimal discomfort immediately following your appointment. However, there are still some behaviors and products to avoid. Here’s what not to do after Botox:

Many doctors instruct patients to avoid lying flat for at least four hours. While this is still the official recommendation, it’s more theoretical than scientific.

Lying down increases blood flow to the head area. Before the Botox has time to bind to the receptors, theoretically, it could be washed out or flow to a muscle you didn’t want targeted. This potentially helps you avoid the most common side effect, a droopy eyelid, but it hasn’t been scientifically-proven to lessen this potential effect.

2. Avoid anything that induces bacteria… including makeup.

After any cosmetic injection, avoid massaging or pressing on the injection site and avoid makeup. We have holes in our skin from the injection that allow bacteria to enter. We don’t want to introduce anything that could infect the area. Cosmetics at home are not completely sterile so it’s best to avoid putting them on the skin for 24 hours following an injection.

As a rule, avoid touching the site of the injection entirely. It may feel itchy or slightly irritated, increasing our tendency to rub or scratch at it. However, doing so can introduce bacteria and therefore infection.

With any procedure, most doctors recommend avoiding intense exercise for a period of 24-72 hours following the procedure. Perspiration could introduce bacteria into the injection site, increasing the risk of infection. Also, increased blood flow could produce a migration of the toxin. If the toxin moves, it will affect a different nerve or muscle than we targeted.

How long does it last?

It’s like working out — if you never used your bicep, it’d be skinny and weak. These injections work the same way. If we repeatedly limit the use of a specific muscle, eventually that muscle weakens. Eventually, those muscles may require less volume, less often.

Patients often question the safety of Botox injections based on information they found online. They’ve read accusations of it being poisonous and heard horror stories about physicians who used low-quality injection liquid. There are now high standards for quality assurance that regulate the type and concentration levels of botulinum toxins available.

In reality, small doses of Botox, Dysport, and Xeomin administered by a medical professional are beneficial and very safe. In many ways, it’s even a safer option than local anesthetics used to numb the skin for minor procedures.

Is Botox Right For You?

If you’re considering Botox, take steps to see if it’s the right for you. Don’t assume it’ll fix any line or wrinkle you have, but also don’t write it off as a hazard.

If you’ve doubted it’s safety, you can feel confident about how it’s regulated and administered. If you’ve doubted it’s effectiveness, talk to your provider to see if it’s a viable option for the issue you want to address. Don’t let other people’s opinions sway you — find out for yourself if it’s the right treatment for you.

Dr. Angelo Petropolis is a board-certified dermatologist in Sierra Vista, AZ with over 25 years of experience. He is skilled in practicing medical, surgical, pediatric, and cosmetic dermatology, and he has extensive expertise in the treatment of skin cancer, Mohs micrographic surgery, and the treatment of aging skin. In his spare time, Dr. Petropolis enjoys traveling with his wife of 42 years, Wanda, spoiling his grandchildren, and flying.