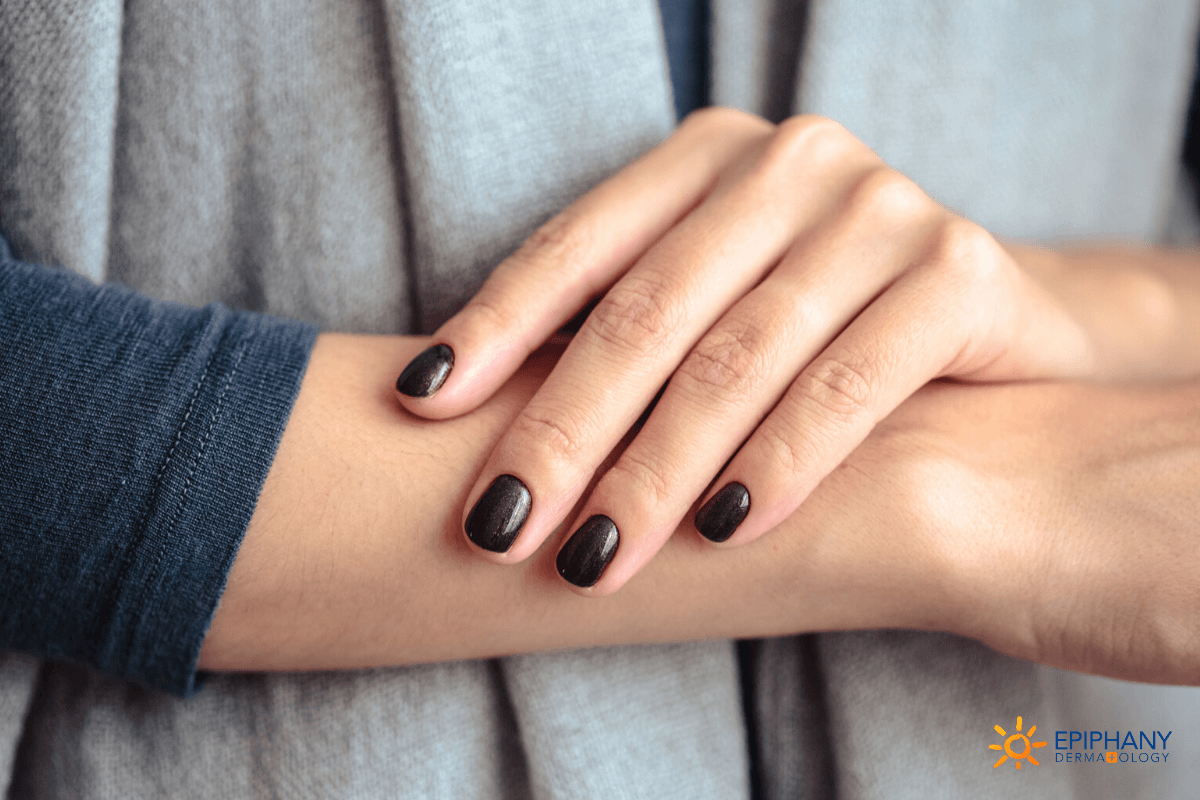 Fingernail health may be one of the last things people think about, but does it actually matter?

While your fingernails probably aren’t at the top of your healthcare priority list, keeping them clean and fungus-free is still important. Whether you love your regular manicures or the only reason you even cut your nails is that they get in your way, here’s why you should pay attention to something as obscure as your nails.

When we think about our nails, we often associate care with cosmetic routines, not our general health. Some people put a lot of time, money, and effort into the care of their nails with polishing, manicures, and pedicures. But fingernail health is about more than cosmetic appearance.

Nail disease and nail dystrophy, which shows upon fragile nails or other sudden changes, can be a sign of systemic issues simultaneously happening within the body. If you notice these symptoms, here are some examples of what they may mean:

Melanoma or squamous cell carcinoma can happen underneath the nail. These cancers can be extremely aggressive, especially because patients often forget to attend to changes in their nails and ask their doctors about them. As a matter of fact, the singer Bob Marley reportedly died of a melanoma under a toenail, something we reference and tell our patients as a reminder of why we look at the feet and nails during a complete skin exam. If a skin cancer of the nail is diagnosed, this may be treated surgically with Mohs micrographic surgery or wide local excision and additional complementary (adjuvant) therapy may be used.Nails often hint at our systemic disorders, but nails can have their own problems too.

When we think of the nails as an indicator of our internal condition, we realize healthy looking nails are about more than cosmetics. It’s instead an important manifestation of our overall health.

How Healthy Nails Should Look

Remember how your nails looked when you were young? That’s a healthy nail.

Healthy fingernails have no redness or scale around them, they’re shiny with no ridges or pits, and they grow symmetrically. The white area at the base of the nail plate, called the lunula (because it looks like a crescent moon), typically is smaller than one-third of a nail.

How Do We Make Our Nails Worse?

While most of us would love to once again have the shiny, healthy nails of our youth, we make one universal mistake that keeps our nails from looking healthy.

Sure, we can’t help it, but aging is one of the worst things we do for our nails. They typically don’t have the shiny clean appearance they did when we were younger. Plus, the older we get, the more brittle and thin our nails become.

Also, over time, patients have an increased risk of nail disease and fungus — particularly for men over 50. Nail fungus can cause brittle nails, thickening of the nails, yellowing, or other discoloration.

Chronically washing the hands or chronic irritation of the cuticles also endangers our fingernail health. While trimming cuticles is often a staple part of a manicure, we don’t recommend it.

Cuticles are the white areas of transition from the skin to the nail plate. Breaking the barrier between the cuticle and nail plate can introduce infection, inflammation, and result in an overall decline in our fingernail health.

When to Seek Medical Attention For Nail Disease

If something in the appearance of the nails changes significantly, recognize it as a warning sign and seek medical attention, particularly if it happens to every nail.

If you notice a dark pigmentation, a new or growing streak in the nail (the streak has been there for a lifetime, but starts widening), a new lesion underneath the nail, or increased fragility of your nails that doesn’t seem to be associated with your age, seek a consultation with your dermatologist. It could be an issue as benign as irritation and fragility due to a certain behavior or a disease as severe as cancer.

Like most issues of the skin, the best treatment for nail disease is prevention.

To prevent trauma to the nail:

To keep your nails healthy, keep them protected with moisturization. Regularly moisturizing your hands and nails will help provide a barrier from infection and work to preserve the health of your nails.

The impact of vitamins such as Keratin or Biotin is debatable. While using these supplements is not harmful to your fingernail health, you may not notice the improvement in your nails you expect.

Any specific treatments for nail problems have to be tailored to the specific nail disorder being evaluated. Rarely, we need a nail biopsy to figure out what’s causing the nail issue. Sometimes, it’s a nail-only problem. Other times, it’s a systemic issue that needs to be addressed with other medications.

Fingernail health isn’t so trivial. Pay attention to your nails for more than cosmetic reasons. If you notice a sudden change in texture or see nail damage, particularly lesions or streaks, make an appointment with your dermatologist. Otherwise, work to keep your nails moist and protected — it matters more than you may have realized.