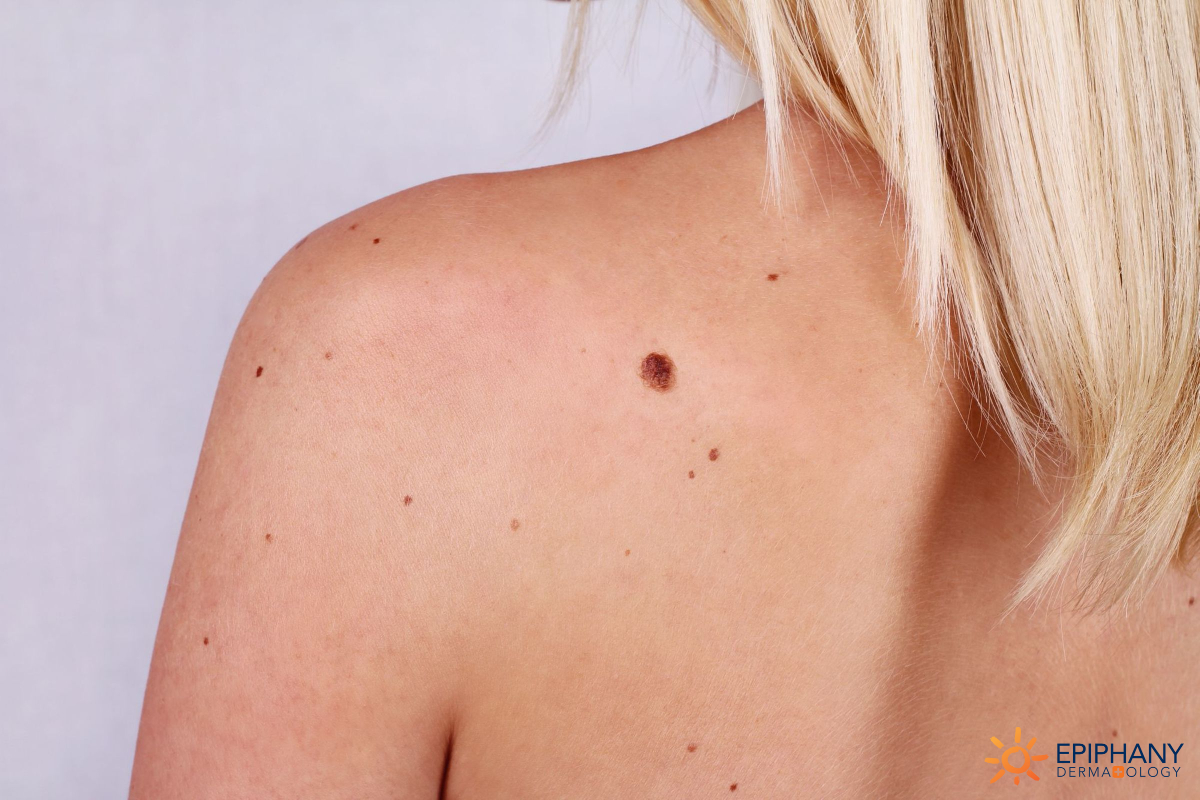 Let’s face it: moles, skin tags, and warts are irritating. Plus, they can be confusing. Most people just don’t know the difference between them.

The good news: none of them cause a risk to your health. But they’re annoying, and it makes your life more comfortable to get rid of them before they become a problem. So, if you want to know what you’re dealing with before you schedule a spot removal, here’s how to tell the difference between a mole, a wart, and a skin tag.

This little flap of skin forms because of friction. It’s been rubbed by a collar, clothing, or sometimes it comes from skin rubbing against skin, particularly under the arm. It starts as a small bump or gland in the skin. Then, once it starts rubbing, there’s a snowball effect. The little ball of skin cells gets pulled up further and further until it’s hanging by a thread. You end up with a ball of skin attached by a thin pedestal.

Skin tags are small flaps of skin, ranging from the size of a small pen head to three centimeters. They form when a small bump or gland sticks up from the skin. That bump is then rubbed, typically under the arms, in the groin, or around the neck. Because of friction, the flap rises even more and can form into a ball shape.

Should You Have A Skin Tag Removed?

The biggest problem with skin tags is the irritation they cause. They can snag, bleed, and hurt. In general, they are just bothersome.

Although they are not dangerous, when skin tags become painful, tender, or unsightly, many patients ask to get them removed.

Distinguishing a skin tag vs wart is rather simple. A colorless raised flap of skin that looks like a little balloon on a stick is a skin tag. A rough, broad-based patch of thick skin is likely a wart.

Neither of these spots have hair growing from them. Like skin tags, warts are typically colorless, unless the skin where it’s formed has a color distinction. Warts are thick and deep, while skin tags remain at the surface.

Most importantly, a wart is caused by a virus and is contagious. It can spread to other people, or to other parts of your body. Skin tags are not contagious to you or anyone else. 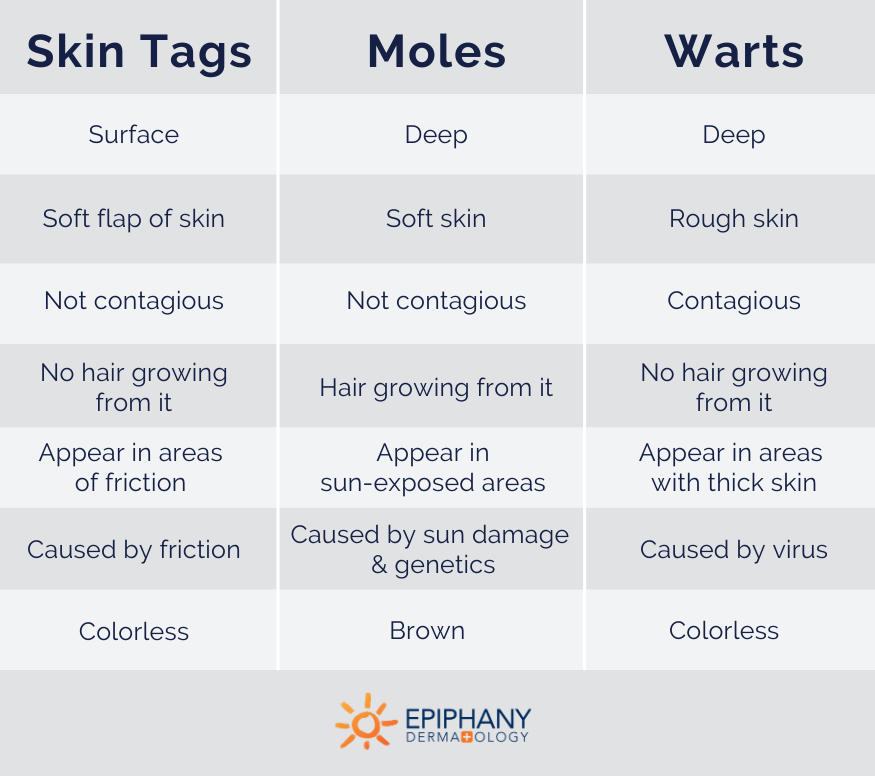 Warts pop up on your hands, knees, or the bottom of your feet. Unlike moles, they’re hard bumps that lie deep in the skin. Although they may be smooth on top, they’re thick, scaly, and callus-like underneath.

Warts start from a virus. And like all viruses, they’re contagious. So, when you see a wart pop up, that means you came into contact with someone else with a wart virus, whether through shaking hands or using the same hand towel.

Should You Have A Wart Removed?

Although we recommend removing any of these spots, warts especially need to be removed quickly (before you pass the virus along to someone else). But when people try to treat them at home, they never seem to get better. Why? They’re a virus that lives in the skin cells. If you don’t get rid of the virus, you won’t get rid of the wart. So you have to treat it long enough to kill all the skin cells that contain the virus.

Wart treatments are painful. If people start an over-the-counter treatment, they often second-guess themselves when the area starts to hurt. They realize they don’t know what they’re doing, and they can’t stand the pain. So they stop the treatment too soon for it to be effective.

For the fastest wart treatment, ask your dermatologist to freeze the wart. This kills the cells containing the virus so your skin can heal wart-free.

Identifying a mole vs wart is also relatively easy. The main distinction is color. While warts are colorless, moles are brown. These dark spots grow slowly and don’t change much, but they can grow hair. Moles typically appear in sun-exposed areas such as the arms, face, back, and chest and are not contagious.

Both warts and moles have a broad base and go deep into the skin, but on a mole, the skin remains soft. Warts, however, appear as rough skin, possibly with points on the surface. They often appear on the hands, feet, elbows, and knees — where the skin is thicker and grows more slowly.

Moles are the most serious of these three skin issues. They form slowly, taking a long time to grow. If they become cancerous, they begin to change.

To see a visual difference between wart and mole bumps, look for pigment and hair. Warts don’t have either, but moles have both. Because of their pigment, they have the rare potential to change from a regular mole into skin cancer.

Some people are predisposed to develop moles, and sun exposure stimulates them. So, if you notice these small benign growths pop up easily on your skin, take extra precautions in the sun to prevent more from forming.

None of these skin issues are dangerous to begin with, but they can become dangerous if certain changes start to happen. Here are the early warning signs that your mole, bump, or wart is developing into something more serious.

Normal moles are either brown or tan — not multi-colored. If your mole seems to be various colors — brown, tan, black, and even red — that’s an early warning sign it’s developing into something else.

Moles are also generally round in shape. If your spot is asymmetrical and continues to increase in size, it may be skin cancer.

Moles can be either flat or raised — but they don’t typically change unless they’re dangerous. If a spot changes from flat to raised, that’s a warning sign.

Any time a mole seems to change or become irregularly colored, visit your dermatologist. Sometimes it’s hard to tell whether or not a spot is dangerous. It’s always best to let a professional make that determination. If you’re dealing with an atypical mole, they’ll likely remove it and send it off for testing. 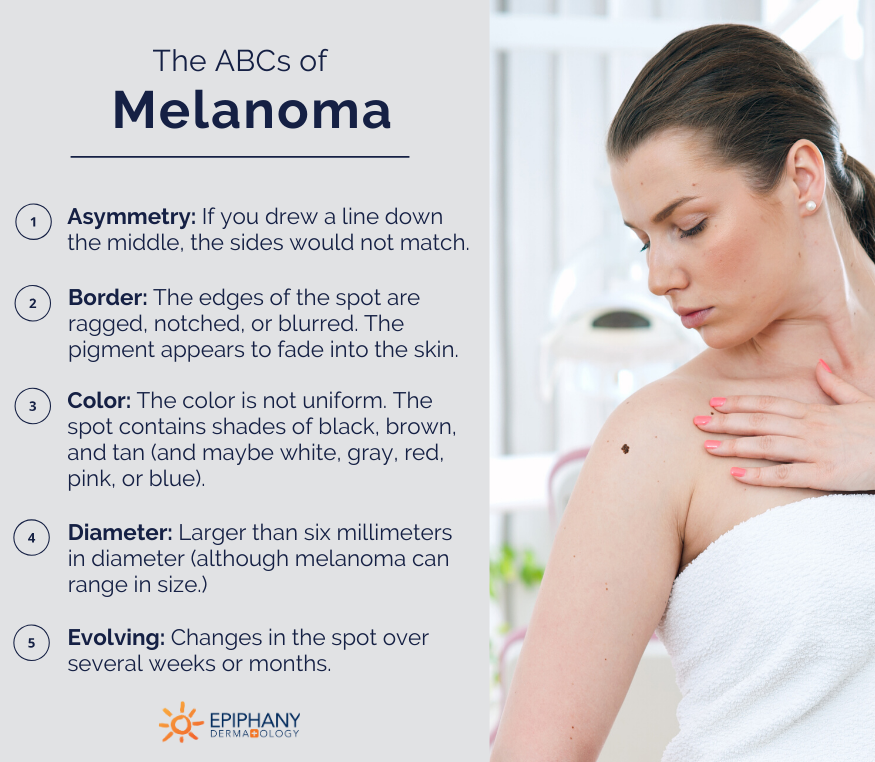 Bumps, blisters, and warts are common. Usually, there’s nothing to fear. However, heed the warning if a spot doesn’t disappear within six weeks. Certain skin cancers can look like a wart or blister, and most are easily treated if you catch them early.

Wart/Sore That Bleeds or Won’t Heal

Pay attention to any wart or sore that doesn’t seem to heal. If it starts to bleed, that’s another sign it could be problematic. If you have a new growth or sore that isn’t healing, visit your dermatologist to have it professionally examined.

Know the ABCs of Melanoma

If you have an atypical mole or another spot that looks suspicious, remember “ABCDE” to check for early features that indicate melanoma.

Should You Try DIY Wart Removal or Mole Removal Treatments?

It can be tempting to try to remove these growths yourself. It’s probably bothering you, but maybe you don’t have time to see a professional. Your skin tag, mole, or wart isn’t dangerous — yet you can cause an infection if you try to remove it on your own.

More often than not, people aren’t successful with DIY spot removal treatments. So save yourself the frustration, and let a dermatologist take care of it.

Will Skin Tags, Moles, and Warts Go Away on Their Own?

No, these spots do not go away on their own. So, whether you have a mole, wart, or skin tag, a board-certified dermatologist can give you the most accurate identification and help you decide if the growth should be removed.

If you have a problematic spot on your skin, contact us to schedule a consultation and discuss your wart or mole removal options.